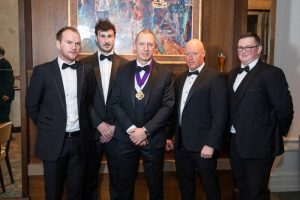 The area was served up to the 1960s by Hugh Martin based in Mountbellew, William Flanagan Ballinasloe, John Fanning in Loughrea and Mr. Healy based in Athleague. Vets were generally only called to horses which served as both the tractor and motorcar for every rural household.

With the onset of TB testing, the veterinary population began to grow. In addition the availability of antibiotics (penicillin) and surgeries such as Caesarean Sections, brought veterinary into farm medicine rather than for workhorses only.

Michael Cogavin acquired Hugh Martin’s practice in Mountbellew in 1959. Joe Connolly set up practice in Ahascragh in 1963. Veterinary practice in the 1960’s and early 1970’s was very different from today – with small cow numbers per holding and milked by hand, pigs being an important sector on every farm and calves reared by hand. There weren’t any slatted units, silage or running water to fields. When Ireland joined the EEC in 1973 and began to receive agricultural supports, stock population increased rapidly.

In 1979 Larry Smyth took over Mick Cogavin’s practice and then passed it on to Gerry Neary in 1987. In the 1980’s and 1990’s farming in the area centred around dairy, beef and sheep. Kepak in Athleague provided extra work for local veterinary practices in the form of meat inspection. TB testing provided a volume of work year round to maintain practice viability. TB and Brucellosis outbreaks were common during this time. BSE reared its head and in 1995 beef prices tumbled as a result of the food scare that resulted.

In 2000 Joe Connolly’s practice was taken over by Conor Geraghty.  During this period equine industry experienced a surge and the practice developed as both a farm animal and modern equine stud medicine practice, being the first in the area to bring ultrasound scanning, endoscopy, radiography to clients doorsteps. Herd health planning became a more important part of veterinary practice.

The two practices were amalgamated in 2012 to form Geraghty & Neary Veterinary. The practice joined XLVets Ireland in 2014 and over the last 6 years has grown and expanded its services to clients to include a fully comprehensive large animal and equine practice with a six vet team. Gerry Neary retired from clinical practice in 2017. In 2020 the practice rebranded as FarmGate Veterinary Group.

We use cookies to optimize our website and our services. For our policies, please visit our
Manage options Manage services Manage vendors Read more about these purposes
View preferences
{title} {title} {title}
X